Hero of three truly awful action films in the 1980s. Rambo started off as a mentally unstable ex US Special Forces Vietnam veteran waging a one man war on a corrupt, banjo-playing, small town police chief, and evolved into Hollywood's idea of a US super-soldier and metaphor for American invincibility. Much of current US Foreign Policy is based on the misunderstanding that Rambo is a real person. 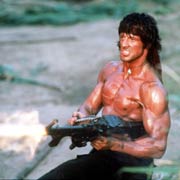 Good drills for the M60.

Rambo's skills and drills were so spectacularly awful that grown men would scream incoherently at the screen, froth at the mouth and throw things; or weep silently when asked by civvies is that what it's like in the army. This catalogue of wankness reached its absolute nadir when he fired a 66mm LAW from the cockpit of the UH-1 helicopter he was flying without harming anyone in it. If you don't appreciate how really, really shit this is, go to your nearest AFCO and sign on for three years, you stinking civvy. Jesus!

The character was played by Sylvester Stallone, who was so wooden that he was upstaged by an inanimate object. Thus, the large saw-backed 'survival' knife Rambo carried and used for a variety of Geneva Convention violations remains the enduring star of the films. This knife had a hollow handle, which contained survival items like matches, fish hooks, a compass and a sharpening stone in a little pouch on the sheath.

Why, FFS? What possible Escape & Evasion scenario would see you left with nothing but a huge fuck-off knife and its sheath, but not the belt it was attached to? Hey, Thanh, hurry up searching that prisoner! Hang on, I've got his rifle, emptied his pockets, nicked his bootlaces, I'm just waiting for him to take his big knife off his webbing before I get his belt kit. Oh, and he wants to know how much we think he should aim off with a magnetic compass encased in ferrous metal. Anyway, to cut a long story short, the term 'Rambo' is not a compliment in the British Army.

Rambo returned in 2008, in Rambo - The Pearl Of The Cobra, appearing in Burma rescuing some missionaries stupid enough to get caught by corrupt government troops. Supporting Sly - who will be 61 when the film is released - are a long list of Z-list actors, one of which appeared in Emmerdale. Good God!

I wish I could think of something witty to say!

However Rambo has become something of a hero to people in Burma through Stallone's fictional exploits. The government's real-life foes circulate bootleg DVDs of the film, even though state censors have ordered video shops not to carry the movie because it denigrates the army's image. A Burmese magazine criticized the movie saying Sly "looks funny fighting a war even though he's so fat with sagging breasts." "Stallone's unsmiling and serious-looking style makes him look like a lunatic," it added.

See also Spam, All The Gear No Idea, Bennett, and Skegness's own John Rambo.